What is it like to use the Sunny 16 Rule in the age of digital evolution? – A guide to knowing about the f/16 rule

From contact printing photos on paper using chemically emulsified negatives from glass plates to digitally storing photographs in a chip in a matter of milliseconds, photography has aged like fine wine, to be fair. However, evolution in photography has proven that its field of operation does not just end as a source of communication but continues to live as a testimonial for people’s creative self-expression.

There was a time in the history of photography, dubbed the ‘film era’ by the people of now, when passionate shutterbugs used to capture moments using a camera with a film role in it, infamously known as the ‘Kodak’. But, of course, Kodak users always had to carry a light meter on their backs to measure the ideal exposure for a shot. But when they did not, they devised some rules and methods to assist them in navigating their fully manual camera exposure.

Among those rules, the famous one was(and is) the Sunny 16 rule. It is so renowned even digital photographers use it to set manual exposures in their automated cameras.

At aperture F16 the ISO and shutter speed should match.

The fundamental rule reads – on a sunlit day, set the aperture to f/16 and shutter speed to the reciprocal of the ISO setting.

By and large, the sunny 16 rule (also understood as the sunny f/16 rule) is an approach to estimating accurate daylight exposures in the absence of a light meter. The sunny 16 rule can assist you in achieving the proper exposure to problematic subjects. You should understand that this rule is contingent on a sunbeam, not a ray of reflected light, as very sunny or shady objects are balanced with nearly all camera light meters.

How do you use the Sunny 16 Rule to operate in the right direction?

The Sunny-16 rule operates on the supposed exposure triangle.

As one of the most consequential aspects of photography, any visual storyteller must comprehend how the exposure triangle functions. Unless you only ever shoot in auto mode, you’ll need to know how to handle your aperture, ISO, and shutter speed.

The triangle presumes you can obtain the exact exposure by varying those values. You can raise your aperture, ISO, or shutter speed when the illumination environment change to reach accurate exposure. If you modify one of the settings one way, you need to alter the other two or one of the settings an equivalent amount the other way.

Example review of the rule

Some practical instances of the rule’s applicability are as follows.

What are some more things to remember when using the Sunny 16 Rule without film camera meters?

Recollect constantly that the Sunny 16 rule is merely a guide and that not all of these elements will always function with perfection. For instance, the usage of a camera stand will indicate maintaining a more diminutive aperture for daybreak and nightfall shots. So it’s vital to reflect that each setting is distinct, and you must reckon it based on the condition you photograph.

As a caution, the sunny 16 rule acts up for the shallow depth of field shots. These photographs are only executed at considerably depressed f/stops, as the passage for light is at its broadest and only lets a narrow focus. Attempts to picture them will not work with an f/16,

Situations you can Benefit from Using Sunny 16 Rule

If you have an anterior background light or from the side, the sunny f16 rule is your modality. Habitually, some of these backgrounds can be perplexing for the camera’s light scale, but if you hold to the rule, you’ll be delivered with the preferred result.

In some circumstances, exposure can be a natural problem for the photog and the camera’s light meter. Many newbies depend on their cameras to get them out of such crises with a pleasing photo. But cameras often fail. That is where the sunny f/16 rule comes in handy. It can bring you out of those sheer lighting positions with a passable photo. What if I don’t have a sunny day to practice the sunny 100/16 rule? Are there other rules like the Sunny 16 Rule in film photography for such speed-shade situations?

It has never always been a sunny day all year long. Some days are quite shady, and the sunny f16 rule fails to accommodate those situations. For this reason, various rules depending on the weather are devised.

Conclusion for the Sunny 16 Rule

The Sunny 16 Rule schemed before the digital era. It was developed as a guideline for photographers who did not have the extravagance to inspect an image after it was produced and to confirm whether the exposure was right or off. They could only see that later when the film was developed and printed. Modern shutterbugs are way better off. But despite the technical improvements made, the Sunny 16 Rule is still pertinent, especially for those who shoot manually. 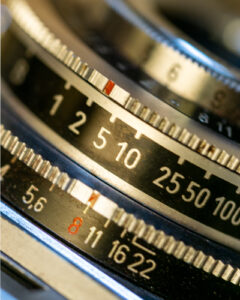 A connection with Moment expression Photography F8 and Be There, “You missed the moment” is Copyright 2022 © All rights Reserved. | Design by Who Said Photography